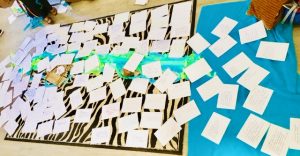 Earlier in the summer, a group of survivors attended an all-day meeting, where they explored the journey of recovery through their own and others’ experiences.   Survivors were asked to describe their individual journeys detailing the facilitators and barriers they had encountered as they moved out of abuse and towards wellbeing, placing thoughts and feelings on cards along a river that had been drawn in cloth on the floor. Before coming together to discuss, the group walked silently around the “River of Recovery” that had been formed, reading the contributions from their fellow survivors. “It was like walking on gravestones” commented one participant, such was the power of the words that flowed out from being asked the simple question “What has helped and hindered you on your journey out of abuse and towards recovery?”

What came out has enabled a greater understanding of the barriers and facilitators that confront or ease those seeking support in their individual journey.  It also raised a number of themes that clearly need further exploration.

Seeking support may well have come after a history of needs being chronically ‘unmet’ and unseen (often whilst in distress), whether that was at school, at work or within a domestic context.  Participants described how their needs were ignored while at school, how employers could be reticent to offer entitlements for sick leave, or being asked, for example, detailed questions about abuse by an Occupational Health assessors over the phone. Underpinning such stories was the lack of empathy experienced by many of the participants on a daily basis and the everyday slights of language, feelings of shame for something that was not one’s own responsibility and the age-old feeling of being judged and for being a ‘bad’ person.

It was clear that positive support came in all shapes and sizes. Whereas some participants described how beneficial  peaceful physical environments were, others talked of the importance of not being alone and the huge benefit of being part of a network of survivors and being able to talk about their own individual abuse, ‘with people who know’. Essential was the importance of friends and colleagues who provided unconditional support and who perceived the process of overcoming abuse as something valuable – their experience being turned into an asset rather than seen as a deficit or pathology.  Validation and understanding whether provided by family, friends, colleagues or professionals were critical. As one participant explained, someone smiling in the street could make more of a difference than they would ever know, a  demonstration of Stephen Porges’ Polyvagal Theory in practice (Porges 2011).

Friends or professionals could, nonetheless, be disempowering through a lack of awareness or even saying nothing, reflecting an all too common ineptitude or lack of understanding.  Pity was hard to take but, by the same token intrusiveness was no easier nor was disregard or dismissiveness of the enormity of trauma, which was described in excruciating examples by many. One participant, for instance, reported that they had been asked if they were self-harming for attention. Others raised the spectre of unhelpful practices in some faith groups, in particular, those that seemed to need survivors to be ‘healed’ and to forgive when they were not willing or ready to.  Indeed, it was negative experiences, by individuals, groups or professional bodies that were controlling, disempowering or even patronising, with ‘solutions’ being imposed rather than discovered, that then, in turn, emphasised what was needed and, by the same token, what was missing.

Accessing good professional support was riddled with difficulties. It is, though, galling to realise that for those embarking on a journey for the first time, perhaps even before first time disclosure, how hard it seems to be to access professional support.  Many talked of the lack of availability of appropriate counselling or therapy.  For most, specialised counselling was out of reach given the cost and, if it were cheaper, it might mean that the counsellors might be trainees or less experienced.  The competency of many therapists and counsellors to be survivor-safe and trauma-informed – be they trainees or even experienced counsellors – was questioned by participants.  Similar to access to many statutory mental health services, the threshold of access was high with reports that it was often only available if one was suicidal – and with some trauma services actively excluding survivors of childhood abuse. Further, services tended to be neatly categorised and the experience was of little integration or overlap such as accessing mental health and substance misuse support. In the eyes of those who attended the workshop, ‘holistic’ provision remained very much in the future.

Once the hurdle of accessing provision had been jumped, it was not as if anything became simpler.

Participants talked of the lack of professionals with appropriate training, the lack of understanding of abuse and the lack of consistency in treatment.  Most commonly, participants related how, given the lack of awareness of such trauma, professionals would ask totally inappropriate questions in part because they might assume that abuse experiences fitted into neat boxes or that there might be a beginning, middle and end with answers. It was not so much that the impact and effects of the trauma fell on deaf ears but ears that did not seem to hear because, the GP, the counsellor, the therapist, perhaps even a consultant or a mental health nurse simply did not seem to have the appropriate training and nuanced understanding for the depth of experience that comes from living through abuse.

The vital/assumed importance of survivor-professionals became clear as participants discussed the themes.  A number explicitly noted that support that was welcomed would come in the form of being ‘heard’ and being listened to but, at the same time, with professionals who were willing to learn themselves and to take the lead from the survivor.  Some considered, however, that there was actually a balance between working with the therapist or counsellor and ‘training’ them which might mean constantly having to explain feelings and the effect of trauma (and in many cases, having to pay a therapist to ‘train’ them effectively in how to – and not to – respond to trauma survivors) . This could negate positive effects of the counselling process and move people backwards down the journey of recovery. A number of participants talked of how professionals directly or indirectly doubted their experiences of abuse, implying that they were ‘not remembering’, embellishing or creating myths. Certainly, counselling and therapy had to provide a ‘safe’ place. Trust was critical but this was merely part of a greater therapeutic picture that should also comprise consultation, tenderness, gentleness, lack of judgement and honesty. Experience of GPs was indeed no better.  The same qualities were of course pertinent but so often, due to perhaps an inability to understand or to ‘hear’, GPs were of so often seen to be dismissive, reluctant to provide a referral and happy just to prescribe medication.  As upsetting were those GPs who failed to see the physical impact of adverse childhood experiences (despite clear research evidence) and the difficulties for some survivors in having physical examinations.   Ironically, one participant was refused further support simply because they had not previously discussed their trauma with the GP.

Solace, nevertheless, was found by some through reading literature on trauma in order to help oneself, but this created further barriers to getting help. Some participants had done so extensively and this in turn created difficulty in finding therapists who could match their understanding which, by this point, was a strong mix of trauma theory and lived experience.  Paradoxically, in this age of fear of the power of social media, the role of the internet and survivor forums came through as a positive influence through gaining insight and the sharing of feelings and experiences with other survivors.

Where does this leave survivors and the process of recovery?  It certainly raises the question of whether it is just a matter of increasing the understanding of abuse and survival, even as two distinct but interdependent parts.  This, of course, will not necessarily increase the effectiveness and relevance of professional training but it may point to support and therapy that does not attempt to impose a ‘one size fits all’ approach.

At the same time, there appears to be a need for a shift in understanding not just what being a survivor entails but equally what, if anything, distinguishes the impacts of the different forms of abuse – sexual, physical, emotional, narcissistic – from other trauma.  This, though, should not be seen in isolation but instead within a far wider context.  There is a need, for example,  for a paradigm shift in conversations about abuse,  from the conceptualisation that it is somehow static or simply a fact and instead for it to be considered as an ever evolving and developing process and journey. What needs to happen now is clearly a complex societal process, but it is undeniable that the generally accepted notion that abuse is ‘wrong’, particularly by the media and professionals  is merely the first step.  Perhaps society now needs to understand how the dichotomy of survivors’ need and desire to be ‘normal’ at the same time as knowing that they are intrinsically ‘different’ can only be resolved by appropriate acknowledgement through a variety of mechanisms. What is clear is that a workforce of highly trained professionals will be a prerequisite and that the voice of survivors in shaping the training and practice of those professionals is critical to help attain this.

That is exactly what we at Survivors’ Voices are committed to, working in partnership with those who are responsible for the training of people whose practice is so critical to our experience of being helped.

Sign up to our Newsletter to stay in touch

Support Survivors Voices with a donation. The Donate button takes you to the Paypal account of Reshapers CIC, our parent company.